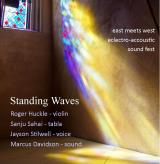 Sangu Sahai is one of the greatest tabla players of the Benares tradition, with a world wide reputation.

Jayson Stilwell is one of the UK’s leading overtone singers, and has been collaborating with Marcus over several projects.

Event information can be found here and here.