New Standing Waves promo video February 21st, 2020Marcus Davidson
Sticky Post By Marcus Davidson Posted in News Permalink
Many thanks for the great review of our album ¨The Wave¨ in Adverse Effect Magazine by Richard Johnson.

Seven collaborative compositions by Marcus Davidson, already known for his work with Chris Watson and Philip Jeck, and classical violinist Roger Huckle that merge the music of the eastern and western hemispheres. Following the first one, ‘Tabla Dance’, a heady and rousing number one can imagine many letting their feet respond wildly to, ‘Elegy’ is rather more restrained and polite as it veers away from the folkish nature towards a chamber piece a little out of place as the rest of the album unfolds to reveal an approach generally more in keeping with the opener. Fourth cut ‘Hildegard’s Dream’ includes a powerful and mesmerising vocal performance from Kat Kleve, whilst ‘The Wave – Part 1’ throws in vocalisations from Jayson Stilwell and assumes a more sober posture without losing the eastern elements that buoy almost everything else so well. The second part of the title track is more spirited despite a slightly sorrowful air hanging over the proceedings you can still imagine being jigged to, then the final, wonderfully titled, ’Sky of Consciousness’ brings everything to a close on the kind of atmospheric high note commanding further returns to this fray. Although not quite as subtly envelope-pushing as, say, Michel Banabila’s own dabbling with such areas, this delivers like it would be great in its original setting with films from Kam Wan and the European Space Agency accompanying it. (RJ)

Thanks to Radio Nacional de España for playing ¨Elegy¨ from our album The Wave on their forthcoming Radio 3 program Atmosfera on Sunday 02.02.2020 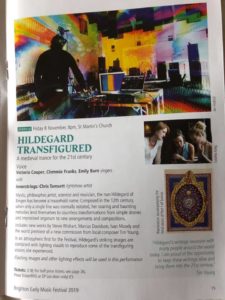 Musical Harmony, a setting of the text by Hildegard von Bingen, written by Marcus was performed by Voice trio at Hildegard Tranfigured, in the Brighton Early Music festival at St. Martin´s on 8th November.

An SATB version can be found here.

A remix of Anima from ¨The Conscious Sky¨ was performed at Avgarde´s Samtidskunst disco (contemporary music) at Landmark, Bergen on 6th November. Below is the set list. Bergen composers supplied tracks for a great evening of music and dancing! 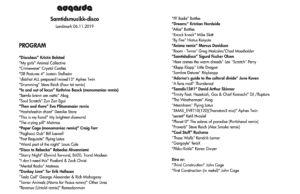 September 19, 2019
The Sound of Sky Consciousness

The best music of any genre, or from any part of the world, has the ability to transport the listener to another dimension. When that music is also a fusion of Eastern & Western and of Classical with digital soundscape then you have something special.

I enjoy anything that transcends boundaries of any description so, as long as the quality of performances matched the intent, I was always going to find this concert inspiring. Thankfully they did. Roger Huckle’s violin playing, for some reason I can’t quantify, reminded me of Stephane Grappelli. It often had a positively haunting quality to it that seemed to silence the thinking mind. Just what one needs after a hard day at the office!

Kat Kleve’s soaring soprano voice was as equally captivating as it was natural. Apparently effortless it seemed to lend itself to the pieces: particular Hildegard’s Dream, based on a chant written by the 12th Century abbess. Not surprisingly this piece was meditational. So too were a number of the others: enabling, in me at least, a strong sense of connection to ‘something beyond’.

Sky of Consciousness was one such piece. In the context of this blog on the Conscious Evolution Today website, it could indeed be offered as an example of what ‘consciousness beyond the rational’ sounds like. If the sky, like the rest of the cosmos has a natural energy and presence of its own might not one facet of it, in the human range of perception, feel and resonate with us as this number did for me?

For others it was probably the guest appearance of Pee Wee Ellis that provided the highlight. This legendary saxophonist blended superbly with the Bristol Ensemble in a piece especially written by Marcus Davidson.

As always, the acoustics of St George’s supported the compositions and performances wonderfully. As on the CD (see http://www.standingwavesconcert.com/) the depth and breadth of Davidson’s soundscapes provide ample for the modern, easily-bored mind to engage with.

For anyone exploring music beyond genres, or cosmic consciousness, Standing Waves is highly recommended.

Thanks to Toperiodiko (Greece) for the great write up of our album ¨The Wave¨ in Auditorium on 2/08/2019.

Thanks to Bad Alchemy for the great write up this month of our album The Wave, described as ¨head cinema!¨

A big night playing solo piano for Ballet Bernasconis performance in Amsterdam at Het Amsterdam Theaterhuis on Saturday 15th June 2019. Inspirational dancing and choreography made it easy to play for! 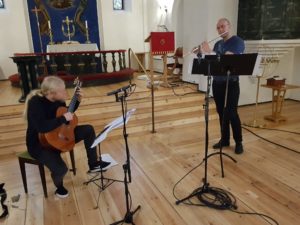 Boen/Fiskaaen Duo recorded 4 Balkan Dances at Loddefjord Kirke on 10/06/2019. We had a great recording session, ably engineered by Cem Arapkirlioglu.